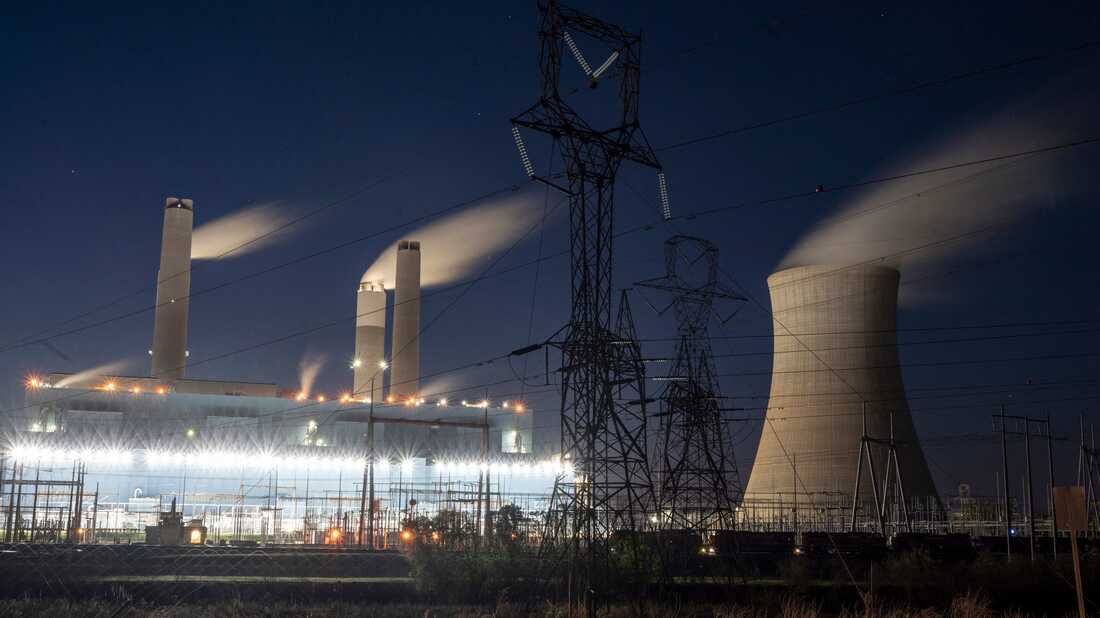 The Miller coal power plant in Adamsville, Alabama, sent about as much planet warming carbon dioxide last year as 3.7 million cars. An industry group says a climate plan in Congress would shut down all U.S. coal plants by 2030, or earlier.

The Miller coal power plant in Adamsville, Alabama, sent about as much planet warming carbon dioxide last year as 3.7 million cars. An industry group says a climate plan in Congress would shut down all U.S. coal plants by 2030, or earlier.

President Biden’s ambitious climate change plan could soon become a reality, if Democrats in Congress succeed in passing a $3.5 trillion budget package. But first Democrats, who are crafting the legislation without Republican support, must overcome powerful opposition, some of it within their own party.

This legislation would bring extraordinary changes to the country’s energy sector. It would lead to huge reductions in the climate-warming greenhouse gases the U.S. emits, and change the kind of car many Americans drive.

A key element is a $150 billion Clean Electricity Performance Program (CEPP) that would pay utilities to switch from greenhouse-gas-emitting electricity sources, such as coal and natural gas, to non-emitting-sources like wind, solar, hydropower and nuclear.

Of course, the deal is far from assured. Because Democrats lack a majority large enough to overcome the 60-vote threshold that has become all but required to pass major legislation through the Senate, they plan to use an arcane process known as budget reconciliation to pass the bill with just a simple majority vote. That would require every single Democratic vote. But some moderates have already expressed concerns about the package, and there’s pressure to strip out some major elements.

Coal would be the big loser

If the clean electricity plan passes, analysts say it’s possible new gas power plants could still be built, if they had costly systems to capture their carbon emissions. But the plan mostly favors renewable and nuclear power. Coal would take the biggest hit.

“The CEPP would eliminate coal-fired electricity by 2030, if not sooner,” wrote Michelle Bloodworth, President and CEO of America’s Power, a trade group for the coal-fired power industry. She made the prediction in a letter to Senators expressing her industry’s opposition to the plan.

Environmentalists, though, feel optimistic about how the energy and climate provisions of the budget legislation are coming together, with not just the electricity plan but also tens of billions of dollars in proposed tax credits for cleaner energy sources.

The government would use carrots and sticks to push renewables

While the details could change before any final passage, the current version of the CEPP would pay utilities that increase the amount of clean electricity supplied to customers by at least 4% each year for ten years. Utilities that fail to meet that target would face penalties.

“There’s a payment the utilities will have to make to the government,” says Krasnow.

The climate elements in the budget bill also include $13.5 billion for more electric vehicle charging stations, and to convert trucks to electric. An analysis from the Rhodium Group shows that this — combined with a proposed $7,500 tax credit for electric vehicles — could mean 61% of total vehicles sales in 2030 would be EVs. That exceeds the administration’s goal of 50% by then.

“Our industry feels like it’s under attack,” says American Exploration and Production Council CEO Anne Bradbury. She says Democrats “…are rushing bad policy in an enormous bill that very few people are actually going to read, and will not have the appropriate time for the American people or even lawmakers to fully digest the impact.”

Trying to slow down the legislation appears to be a goal for many of its critics, while others outright oppose it.

“The bill as it’s come out would dramatically increase the size and scope of government through record levels of spending,” says Marty Durbin, senior vice president of policy at the U.S. Chamber of Commerce, which vowed to defeat the bill in August. That’s despite having members that say they are committed to addressing climate change.

Some environmental organizations warn that companies that say they want climate solutions but then support trade groups working against them could see their business suffer in the future. And a few, such as Greenpeace, are pressuring Democrats to do even more to eliminate subsidies for fossil fuel industries.

“Our tax dollars must support families, not prop up the companies most responsible for the climate crisis,” said Ebony Twilley Martin, co-executive director of Greenpeace USA in a statement.

West Virginia Democratic Senator Joe Manchin has ties to the coal industry and he told CNN he won’t vote for the package. He argues utilities already are moving away from coal, so it doesn’t make sense to “pay companies to do what they’re already doing.”

But scientists say that shift must happen faster to avoid the worst effects of climate change. And environmental advocates say this summer’s climate-fueled hurricanes, tornadoes, floods and fires laid bare the need for urgent action in Congress.

“We’re already seeing catastrophes happening around the country and around the world. We have to act now and we have to go big,” says Tiernan Sittenfeld, the head of government affairs with the League of Conservation Voters.

The legislation is designed to meet U.S. obligations in the Paris climate agreement. For the Biden administration, it’s important to have the measures in place before a meeting with other countries in Glasgow in November, where it hopes to push nations like China and India to ratchet up their own climate commitments.

Sittenfeld says this week is crunch time to move the legislation toward passage. That’s why her group sent a letter to Democratic lawmakers, warning “that we would only be considering endorsements for members of Congress who support climate provisions.”

Sittenfeld and other environmentalists say they are watching and hoping those measures don’t get watered down as negotiations continue.