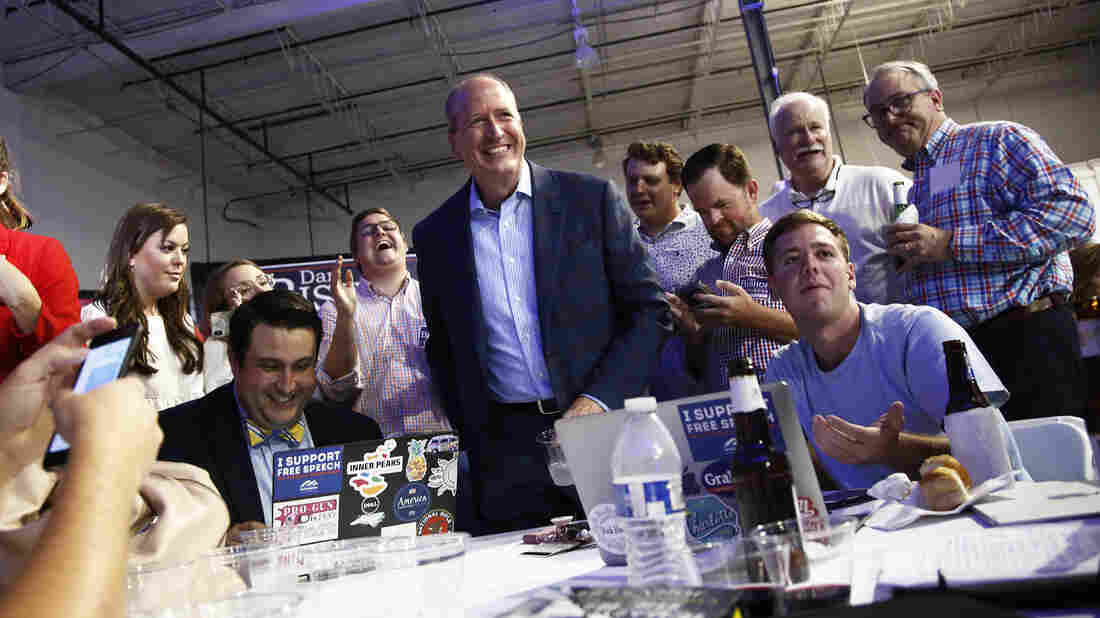 Dan Bishop, center, smiles as he gets up from the table after looking at election results with supporters during an election night party Tuesday in Monroe, N.C. September 10, 2019 in Monroe, N.C.

Dan Bishop, center, smiles as he gets up from the table after looking at election results with supporters during an election night party Tuesday in Monroe, N.C. September 10, 2019 in Monroe, N.C.

Republican Dan Bishop eked out a victory in a closely watched North Carolina special congressional election on Tuesday night — a scandal-plagued race that was actually the final uncalled contest of the 2018 midterms.

Bishop, a state senator, narrowly defeated Democrat Dan McCready by fewer than 5,000 votes — 50.8% to 48.6% — with nearly all precincts reporting. This suburban Charlotte district had voted for Trump by 12 points in 2016 and has been held by Republicans for more than 50 years. The president held an election eve rally to help save the seat that appeared to have the intended boost, especially when looking at the Election Day turnout.

President Trump partially credited himself for Bishop’s victory in a tweet Tuesday night:

Dan Bishop was down 17 points 3 weeks ago. He then asked me for help, we changed his strategy together, and he ran a great race. Big Rally last night. Now it looks like he is going to win. @CNN & @MSNBC are moving their big studio equipment and to talent out. Stay tuned!

No public or private polling ever showed Bishop down by that much, and both parties acknowledged throughout the race that it was a neck-and-neck contest.

Trump later called the race a “big night for the Republican party.”

The close margin of victory should be incredibly worrisome for Republicans — showing that Democratic enthusiasm, especially in the suburbs, hasn’t dissipated much since the November elections when the House flipped control. But McCready actually ended up losing ground in some rural areas, compared to his 2018 margins. It’s further evidence that Democrats haven’t yet found a way to make gains outside of their strongholds — and further highlighting the growing urban/suburban vs. rural divide in the country.

This was actually the final election of the 2018 midterms — thanks to months-long drama due to allegations of ballot tampering by an aide to then-GOP nominee Mark Harris. The final total showed Harris with a slim 905 vote lead over McCready. But the state board of elections threw out that result and ordered a new election. Harris bowed out and Republicans picked a new, less-tainted nominee in Bishop.

McCready, a Marine Corps veteran who pitched himself as a centrist who was focused on health care and pocketbook issues, had a head start in the race and heavily outraised Bishop. That’s why Republican outside groups poured more than $6 million in outside spending to level the playing field and salvage a win.

Bishop ran a campaign where he closely tied himself to Trump and promised to be a faithful ally of the president in Congress. He tied Bishop to progressive Democrats, such as New York Rep. Alexandria Ocasio-Cortez and Minnesota Rep. Ilhan Omar, in ads, utilizing Trump’s rhetoric to brand them and McCready as socialists.

National Republican Congressional Committee Chairman Tom Emmer said that Bishop’s victory showed that their messaging so far in the 2020 cycle was working.

“North Carolinians rejected the Democrats’ socialist agenda and elected a representative who will defend North Carolina values, and will always fight for freedom and against socialism,” Emmer said in a statement.

But Democratic Congressional Campaign Committee Chairwoman Cheri Bustos pointed out that this was already a far more conservative seat than most of the ones Democrats flipped in 2018.”There are 34 Republican-held districts that are more favorable to Democrats than North Carolina’s Ninth. Tonight’s razor-thin result in this ruby-red district solidifies the fact that Democrats are pushing further into Republican strongholds and are in a commanding position to protect and expand our House Majority in 2020.