Starting Sunday, Immigration and Customs Enforcement (ICE) is expected to resume its previously announced plan to apprehend thousands of illegal immigrants across the country.

The reinvigorated effort comes just weeks after President Trump tweeted that ICE was preparing to kick off days of raids in at least 10 major cities. The operation was halted, however, the day before it was set to start, to give Congress time to arrive at a legislative solution on immigration. Trump said his administration would relaunch the raids after a two-week window – after the Independence Day observance – and that time now seems to have arrived.

So why are the raids being publicized days in advance?

“It’s unprecedented. But there is a political purpose behind it,” Thomas Kilbride, a retired Department of Homeland Security (DHS) agent and ICE policy adviser, told Fox News. He said the president has tried to get Democrats to come to the table because asylum laws need to change, and this is a way to bargain.

WAR CRIMINALS AMONG US: INSIDE THE QUIET EFFORT TO PROSECUTE AND DEPORT VIOLATORS DISGUISED AS REFUGEES

ICE agents are expected to target a minimum of 2,000 immigrants who have already been listed for deportation, but Kilbride said there will be “collateral” fallout.

What does that mean, though? While there are roughly a million people in the United States with removal orders, according to officials, those with criminal histories are the ones being sought. If other illegals are located along with a person of interest, they, too, will be arrested as part of that fallout.

But whether any political ambitions connected to the operation will prove successful remains to be seen.

“At a minimum, the asylum laws need to change, for people to have to remain outside the country when applying for asylum or applying at a foreign embassy,” Kilbride said. “What we are seeing at the border now is unprecedented.”

Other experts have underscored that Trump’s announcements are something of a gesture – and not something that the administration was under any legal obligation to do.

“The main point here is that the Trump administration is trying to circumvent some of the blowback from the other side of the aisle. It sends the message that these people have been notified to self-deport and if they fail to do that, this might happen,” said Steve Bucci, homeland security expert at the Heritage Foundation. “It is saying that we aren’t monsters, what we are doing is in accordance with the law and in a reasonable fashion.

“Past administrations didn’t announce raids because they didn’t have to, they just did them.”

Yet the heads-up also means that many may have left the addresses known to DHS in the weeks since the raids were first trumpeted, further hindering their effectiveness.

“Some may go into hiding or to a church providing a sanctuary,” Bucci continued.

Erin Corcoran, an immigration expert and executive director of Notre Dame’s Kroc Institute for International Peace Studies, affirmed that in the past, raids were not announced beforehand by immigration enforcement, just as they are not announced when law enforcement is involved; when the information is exposed, it can more often than not prove detrimental to an operation.

“Sometimes there have been leaks by individuals, but it has never been a policy choice to pre-emptively announce raids. It compromises the effectiveness of the raids. Those being targeted may relocate or refuse to answer the door when immigration officials knock because they are anticipating the raids,” she said. “Raids have been conducted by other administrations, oftentimes targeting certain types of immigration violations, including those with criminal convictions. However, there has not been an immigration raid by previous administrations targeting families or children.

The public announcement of the forthcoming raids has inspired a number of hashtag campaigns, from #protecteachother to #knowyourights, aimed at giving undocumented migrants information about civil liberties that include the rights to silence and an attorney.

Acting Citizenship and Immigration Services Director Ken Cuccinelli said this week that the raids were “absolutely going to happen,” though he did not give an exact date for when “operational elements will roll out.” 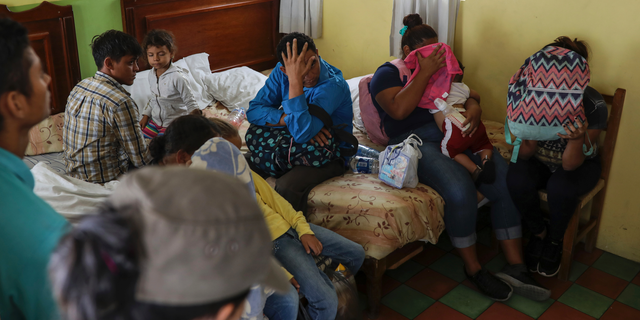 Central American migrants sit together inside a room at the Latino hotel during a raid by Mexican immigration agents in Veracruz, Mexico last month. Under increasing U.S. pressure to reduce the flow of hundreds of thousands of Central Americans through Mexican territory, Mexico’s government has stepped up enforcement. (AP Photo/Felix Marquez)

Matthew Bourke, a spokesperson for ICE, told reporters Wednesday that his agency “prioritizes the arrest and removal of unlawfully present aliens who pose a threat to national security, public safety and border security” but he also declined to comment on specific details, citing “law enforcement sensitivities and the safety and security” of ICE personnel.

In fact, some officials have expressed concern that declaring the missions publicly is a serious concern where officer safety is involved.

GET THE FOX NEWS APP

At the same time, however, some lawmakers and legal experts speculate that the leak of information from within could also be designed to have the raids halted once again.

Immigration lawyer Saman Nasseri, who’s based in San Diego, contended that releasing information about the raids in advance is problematic not only for security reasons, but because of how often people move on, complicating the tracking of targets. He anticipates that the “operation will most likely be delayed again.”

The notion of immigration reform is set to be at the forefront of Trump’s 2020 re-election campaign and has long been a staple of his presidential agenda. While the migrant flow has shown signs of slowing over the past month, the Trump team has long grappled with the issue of large numbers of immigrants – mostly from Guatemala, Honduras, and El Salvador – crossing the southern border with Mexico. More than 330,000 families have entered the U.S. illegally since the beginning of October, government records show.

DHS did not respond to a request for further comment.